Today is the last day of the PH Blog Tour of The Gilded Wolves by Roshani Chokshi and it’s my stop along with two more lovely bloggers. OKAY, BEFORE ANYTHING ELSE, I would like to thank Rafael at The Royal Polar Bear Reads and Shaine at Wanderer in Neverland for hosting this tour and to Macmillan International for providing us with the ARC for this tour. ❤ For my bookish friends and fellow bloggers, you can check out the other participants’ reviews at the end of this post.

Set in a darkly glamorous world, The Gilded Wolves is full of mystery, decadence, and dangerous but thrilling adventure.

Paris, 1889: The world is on the cusp of industry and power, and the Exposition Universelle has breathed new life into the streets and dredged up ancient secrets. In this city, no one keeps tabs on secrets better than treasure-hunter and wealthy hotelier, Séverin Montagnet-Alarie. But when the all-powerful society, the Order of Babel, seeks him out for help, Séverin is offered a treasure that he never imagined: his true inheritance.

To find the ancient artifact the Order seeks, Séverin will need help from a band of experts: An engineer with a debt to pay. A historian who can’t yet go home. A dancer with a sinister past. And a brother in all but blood, who might care too much.

Together, they’ll have to use their wits and knowledge to hunt the artifact through the dark and glittering heart of Paris. What they find might change the world, but only if they can stay alive.

Roshani Chokshi is a brilliant author and it shows in The Gilded Wolves. I can only imagine the amount of research behind this work and the time it took for Roshani to complete this book. I ABSOLUTELY LOVED THIS, especially the characters— their differences, their relationships with each other. They play a huge part in my love for it. I am a big fan of books with good character dynamics. It makes me love and protect them with all of my being. I’d like to mention my precious children, Zofia and Tristan. I just want to wrap them in fluffy blankets and stare at them all day. No, that’s not creepy at all.

I’ll get back to the characters in a bit, so let us first talk about the plot and setting.  Can we read that first line in the synopsis again? Set in a darkly glamorous world, The Gilded Wolves is full of mystery, decadence, and dangerous but thrilling adventure. That’s exactly what TGW is all about and MORE. The story starts when the Order of Babel is threatened when the matriarch of one of its two remaining houses, House Kore, was attacked. Séverin, the supposed heir to House Vanth, was denied of his inheritance by the matriarch of House Kore. Since then, he made it his life’s mission to recover all of the lost items his House has ever owned. The other house, House Nyx, is headed by Hypnos, Séverin’s previous best friend.

After the attack on House Kore, the Order asks for Séverin’s help to recover an artifact that was stolen in exchange for the one thing he has been working hard to restore, his inheritance as the patriarch for House Vanth. Along with a team of people with mysterious and tragic past, Séverin embarks on a dangerous mission to recover this artifact.

I have read some early reviews comparing TGW to other heist books, particularly the Six of Crows duology. I love Six of Crows and Crooked Kingdom but this book— THIS BOOK!!!! has gotten a place in the very secluded part of my heart, where I will always, always keep it treasured. IT IS A MASTERPIECE, I tell you. It is a multiple POV story told in third person narrative. In each of the character’s POV, we are introduced to and learn more about their background and how their lives become tangled.

I had a difficult time understanding how the magic system worked at first. There is science (and divine aspect?) involved in it. If you’ve watched the classic Barbie movies, you know when a thing just sprouts out of nothing? That’s how the magic works in The Gilded Wolves or at least that’s how I think of it. Termed as Forging by our main characters, I can only describe it as magical. I especially loved how the characters’ outfits can be made magical. My childhood dream of secretly having magic has been awakened. Sci-fi and fantasy lovers would definitely love this magic system.

Okay, now let us talk about my new children. We are first introduced to Séverin, who is half-French and half-Algerian. He is everything I hate to love: brooding and mysterious. He is, however, very protective of his loved ones. We can see this in his treatment to Tristan, his brother who he had sworn to protect. Tristan is an innocent soul who needs all of the love in the world. I remember Alphonse Elric from Fullmetal Alchemist with his character. Of course, I cannot mention Tristan without mentioning Goliath, his pet tarantula, which everyone else fears. We also have Laila, an Indian woman who has the ability to read non-Forged objects and their history. Then, we have Enrique, a Filipino-Spanish historian who wants nothing more than to help his countrymen get their independence. It is one of his frustrations that he does not have any ability to Forge. Zofia is a Polish-Jewish woman who is an excellent Forging engineer who struggles with understanding people’s emotions, especially her own. She is a selfless soul who has made countless of sacrifices for her family. Also, she is a very brilliant person! Lastly, we have Hypnos, the Martiniquan-French patriarch of House Nyx who seems to breathe and radiate sunshine. As I’ve mentioned, the character dynamics is great and I had no frustrations with the characters.

I also want to talk about the characters’ relationships. I love my romance with angst and boy, I got my dose of it in The Gilded Wolves. Roshani writes excellent angsty romance and I cannot wait to get more in the next installment! Their familial love and camaraderie is also worth noting.

I cannot end this review without mentioning the references on Enrique’s Filipino heritage. As a Filipino reader, I treasured the moments I could read about our culture and history here. Which reminds me, I’ll have to remember to pick up more books by Filipino authors in the future.

Overall, The Gilded Wolves is a truly magical book with diverse characters (whom you cannot help but love!) and full of mystery and dangerous missions. 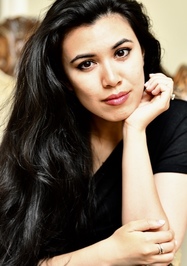 Roshani Chokshi is the New York Times bestselling author of The Star-Touched Queen and A CROWN OF WISHES. Her middle grade debut, ARU SHAH AND THE END OF TIME, released April 3, 2018 from Disney/Rick Riordan Presents. The sequel, ARU SHAH AND THE SONG OF DEATH is slated to release April 30, 2019. Her next young adult novel, THE GILDED WOLVES, is slated for January 15, 2019. Chokshi’s work has appeared in Strange Horizons, Shimmer, and Book Smugglers. She was a finalist in the 2016 Andre Norton Award and the Locus Top Ten for Best First Novel. Her short story, “The Star Maiden,” was longlisted for the British Fantasy Science Award.

Here are the other blog tour participants’ reviews. Do check them out, they’re all awesome! ❤

Erika at The Nocturnal Fey | Avery at B For Bookslut | Salwa (Hey, it’s my stop too!)

The Gilded Wolves is the first book I finished in 2019 and immediately became a favorite! Have you read it yet? Did you like it? What book have you recently picked up and loved? I’d love to know!