In my November 2018 TBR post , I mentioned that Air Awakens by Elise Kova is one of the books I’ve been wanting to read since forever. Now I’m finally reading it! YAAAAS. I’m only a few chapters in AND I’M ALREADY LOVING IT! I can’t wait to devour it in the next few days.

In case you did not know, Elise will be releasing a sequel series to Air Awakens— the Vortex Chronicles. The first book is entitled Vortex Visions and as all of Elise’s book covers are, IT IS SPECTACULAR. HERE’S A SNEAK PEEK. 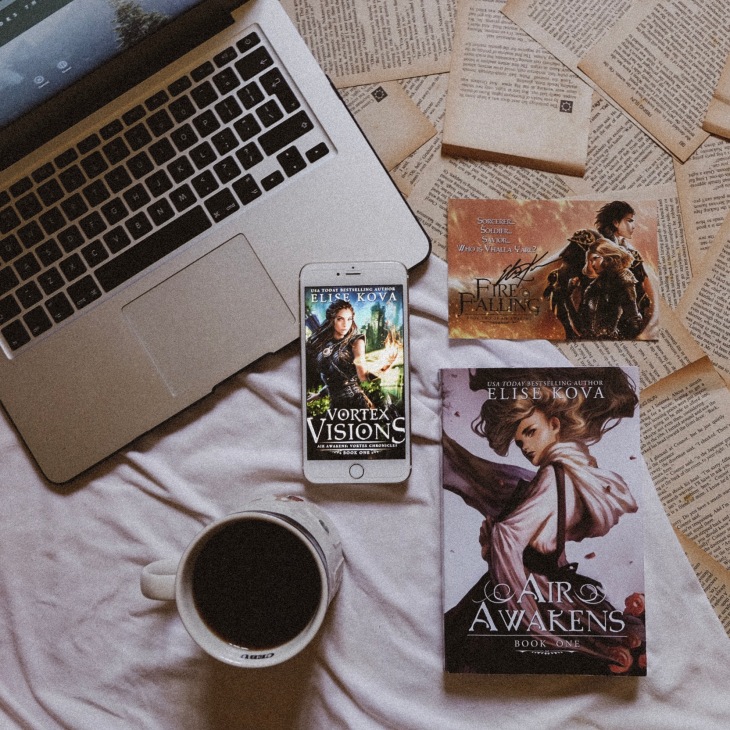 I won’t get tired of saying that Elise’s books have THE BEST COVERS. (Although, I may be biased since I LOVE covers with illustrations in on them 😀) The illustration is done by the very talented Livia Prima. You HAVE TO CHECK HER OUT; she has more stunning artworks like this one!

Now, on to the VORTEX VISIONS COVER— try not to drool on your screen (I almost did!) Drum rolls, please. And…

When I first saw it, I couldn’t stop staring at it (YES, I’M STILL STARING).

You don’t have to read the first series to dive into this since it follows a new protagonist on a new adventure, fighting a new villain, but if you’re like me who doesn’t like missing out on things, I’m sure you’d want to start Air Awakens series too! Well, you’re LUCKY because Air Awakens Book One is ON SALE FOR ONLY $0.99 UNTIL NOVEMBER 27th.

A desperate princess, a magical traveler, and a watch that binds them together with the fate of a dying world.
Vi Solaris is the heir to an Empire she’s barely seen. Her parents sacrificed a life with her to quell a rebellion and secure peace with a political alliance. Now, three years past when her wardship should’ve ended, Vi will do anything to be reunited with her family.
The Empire is faltering beneath the burden of political infighting and a deadly plague. Yet, Vi can’t help but wonder if her inability to control her magic is the true reason her parents haven’t brought her home. Suspicion becomes reality when she unleashes powers she’s not supposed to have.
Powers that might well cost her the throne.
As Vi fights to get her magic under control, a mysterious stranger appears from across the world. He holds the keys to unlocking her full potential, but the knowledge has an unspeakable price — some truths, once seen, cannot be ignored.
All eyes are on her and Vi must make the hardest choice of her life: Play by the rules and claim her throne. Or, break them and save the world.

The release date is on February 4th, 2019, which is only over two months away! The series is currently planned to be four or five books, which should be released every 3 months. The book will be available in paperback and hardcover on February 4th (or just before).

If you haven’t already, you still have time to preorder. If you do, you’ll get a free signed postcard (while supplies last) and you’ll be entered to win a special swag box including a signed hardcover. It’s open to YOU, international friends, as well!

To be entered, all you have to do is forward the following to ElisePreOrder@gmail.com.

In her past lives, she has graduated from an MBA program, lived in Japan for a bit, and worked for a Fortune 500 technology company. However, she finds herself much happier in her current reincarnation as full-time author. When not writing, she can usually be found playing video games, drawing, watching anime, or talking with readers on social media. She’s happy to call Saint Petersburg, Florida, her home, but is always looking forward to her next trip.

Elise is currently unrepresented by any agency. Her Air Awakens and Wish Quartet series are self published and inquiries regarding translation rights, literary representation, or other business matters should be directed through the form on her contact page.

Her Loom Saga is published through Keymaster Press.

That’s it for the cover reveal! Have you read Air Awakens or perhaps Elise’s other series? Also, what do you think of Vortex Visions cover? Let me know in the comments!